29 replies to this topic

Polymorph (self) - change your shape to another creature and assume their physical capabilities. Maybe they would not be able to cast spells while transformed.  All material possessions would be part of the transformation, so you don't see a racoon with a buccaneer hat (as cute as that would be).  I assume the choice of creatures you can turn into would rely upon your magic level.  You wouldn't want a 1st level magic character turning into a grizzly bear.  This would be especially useful for someone with a mage build with low a/d.

Disguise - temporarily change certain aspects of one's appearance AND one's NAME (but any guild moniker would go away during this time). This would change the base clothes color but not allow any change of appearance to equipment or abilities, etc.  Winter might be able to LOOK like Achilles, but would not be able to fight like him.  I'm imagining this would not change the race - or maybe it would??  Ofc this would NOT affect chat channel availability or personal messages... but local chat would reflect the disguised name.  This IS a tricky one, as it plays almost completely to the RP aspect of the game.. and if people are not careful, some players might hear things the speaker didn't intend for them to hear.  It could CERTAINLY make things interesting, but it might turn some players off.

Aw, I wanted a racoon with a racoon hat!

Do you really want troublemakers to impersonate you by making it look like you are bag jumping or spam junk in local?

I'm not worth impersonating

Well, if everyone knows that someone may be in disguise, it creates ambiguity... stirs things up a bit.  Brings a whole other facet to RP in the game.  Besides, True Seeing would reveal the true identity.  There could be other, spells or makeable items that also reveal a disguised person.  It could create whole new aspects of play AND the economy...

I like the polymorph idea. In essence it's the same as invisibility except a damn sight cooler. I also like the 'true seeing' idea which is also cool. At least it has far better potential than EL's 'true sight' potion.

Not sure about racoon hats however. The only creature likely to be caught wearing one in OL is a nublet.

Lots of great ideas being thrown around here.  This one in particular sounds awesome:

How about Charm?  That could make creatures on your side, as if you had summoned them?  Since they don't lose hp and die on their own, the effect would have a duration I imagine.  After x minutes (perhaps based on caster level) they return to their regular disposition.

This could have two variations... low level single target and higher level AoE.

Some mobs would not be charmable.

I also agree that this should be for high level summoners.

A couple of ideas I have had, and I know they have been mentioned in different capacities:

Regeneration Spell ("Ring of Life") - AoE Heal over Time
-Radius of 6x6 or so
-Last ~20 seconds
-Regenerates health to all players in the circle, something like 10/s for a total of 200 health points healed

Directional AoE Heal ("Cone of Light") - Burst heal players infront of you
-Heal players in a small cone radiating out from you (can choose the direction).  Radius could increase with magic level to make this spell more useful in different situations.
-Players closer to you may receive slightly more healing than players further away
-Instant Heal; medium mana / resource cost, medium-high magic lvl required

Massive AoE Heal - ("Growth", "Chain Heal") - Place a large AoE target down to heal all players in the radius (maybe ~8x8)
-Essentially an AoE Remote Heal
-Quite costly
-Requires a high magic lvl (55+)
-Used in a pinch when multiple team members end up fighting targets beyond their level

Heavy damage dealing AoE Spell ("Meteor Strike", "Comet Storm")
-Deals a large amount of damage to all enemies in the selected AoE Location (ideally the same radius as the AoE Heal mentioned above)
-Might make sense to have a Damage over Time effect that lasts until another comet storm is casted, or the timer (5-10s) runs out
-Requires a very high magic lvl (60+)
-Is quite costly

Lastly... some sort of single target Freeze/Root/Stun would be really nice!
There's a whole lot of names to use for this sort of spell.. lets call it "Bind" for now.
-Roots the target in place
-Successive root spells casted at the same target diminishes the effect with every spell cast (i.e the first root might hold a medium level mob in place for 7 seconds, the second 4 seconds, by the third root the target is more or less immune to the spell)
-High level mobs (cyce boss +) are immune to being rooted
-PvP: The amount of time a player will be rooted depends on a combination of Player A's magic-offence and Player B's magic-defense attributes


Just some spells that I've always wanted to see implemented in game.  Yes they are not exactly original.  But if we are wanting to have players optimize their builds to become healers, it would be nice to have a few options to heal a team for different situations.  Many different scenarios already arise if you've watched a DTF (and probably even more scenarios to come) The healer would have to be smart with which specials he/she choses otherwise they will be out of mana quickly.

Yes! All the healing ideas could be for higher level magic, say like 40 and up?

I was thinking some type of spells like Elemental spells i.e;
Fire - Fireball, have a fireball, select a line of fire, go straight with a ball of fire, infliciting X amount of damage to the hit mob/player
Water - Could be defensive spells, say against fire, if you get burned or something like that, cast waterfall, and puts tons of water over you cooling the burn and possibly removing the burn, or fire around you.
Earth - earth quake could be sent around you, like a shockwave spell, damages x amount of damage to people/mobs around you (AoE)
Air- whirlwind or something could be used to confuse the mobs and send them spiraling somewhere else, like a random teleport to a player/mob

While searching for stragglers in WS,  my brain started to wander off and came back with the idea that it might shorten the time to clear WS if one could challenge the invasion mob. The idea would be to have a spell "challenge monsters" which would attract all invasion mob in a certain area (lets say from within ~100 steps) to come to the characters position. The main purpose of this spell would be to ease clearing large maps or make it more interesting. However, there should be a substantial penalty making it dangerous to use so that it cannot be abused.

While searching for stragglers in WS,  my brain started to wander off and came back with the idea that it might shorten the time to clear WS if one could challenge the invasion mob. The idea would be to have a spell "challenge monsters" which would attract all invasion mob in a certain area (lets say from within ~100 steps) to come to the characters position. The main purpose of this spell would be to ease clearing large maps or make it more interesting. However, there should be a substantial penalty making it dangerous to use so that it cannot be abused.

could add a cooldown feature, no magic, item(ie.ring) or #beam me use (a mass cooldown maybe)  so that someone doesn't use this on a map with hordes to tele out and swarm others to die.....

"Learner has also mentioned the possibility of skill shot style spells (in example, a fireball which will deal damage along a path from you to the target location),"

well, this would be great, combine with AoE spells and will be much more interesting and fun I guess

Lots of great ideas here but I want to add that we can't make spells being too costly cuz it will simply stop ppl from using it, who want to waste money, everything should be balanced, higher level = higher profit, richer player.


EDIT: Remeber that we have tiles in game it means you can step/shoot diagonally, not only straight by X/Y

In one of the previous thread's, I meant something like this: 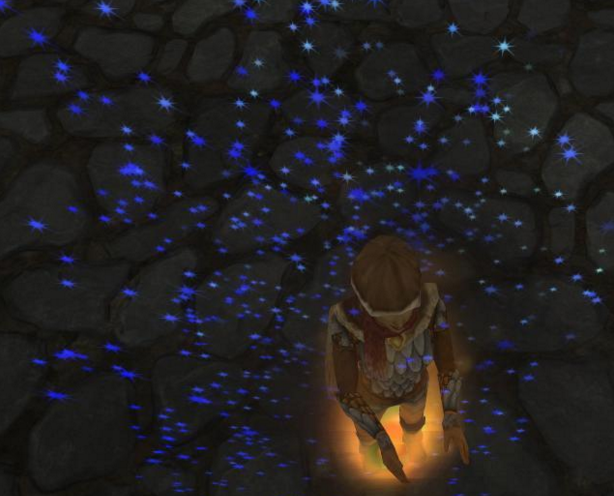 Screen of how it goes with Burning Purification spell, one of your ideas, looks cool to me.As you can see I make char move both hands to show he/she is casting spell so it does look more realistic.

Another is one of my ideas called Explosion, here I made screen of Ice Explosion spell dealing ice damage as well, damage depends on your magic level and magic offense, looks pretty nice I guess, also range of this spell could depend on your mag lvl and stats, here is square 5x5, such animation would appear for like 1-2 seconds after spell cast and then dissappear 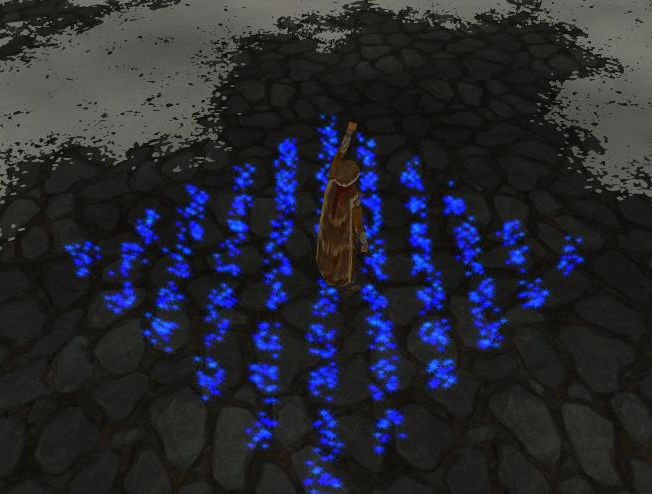 I think it could be also possible to code that when you cast this spell, your char moves one hand so it connects with magical powers like we know from movies etc 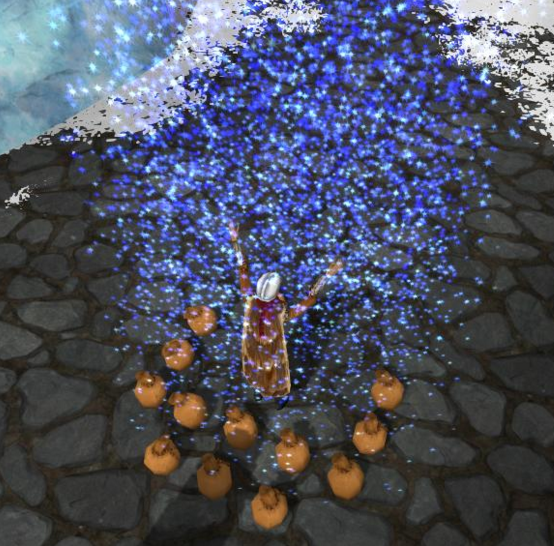 This spell could be called Eternal Waterfall or something like this, it creates magical waterfall around you for 10-12 seconds on range of 3x3 square + 4x 3 tiles around, it gives you and every player in range regeneration effect (200Hp in 20 seconds) + bigger chance for success flee from combat, or smth like this

There are literally tons of ideas and combinations with particles, that brings amazing possibilites

Back to Game Change Discussions

Also tagged with one or more of these keywords: magic

0 user(s) are reading this topic