Related Request:  Testing and continual rebuilding is such a pain atm.  Can we have everlasting bag of free ws ring somewhere, like votd sto maybe, can we make ctrl+A work so u can see what u got without all times #cross, and most important, can we have input box at wraith (with all other npc's to follow later) so u can just put in the # of pps u want to spend on attr/nexus, even with new options it still take up to 5-6 clicks to get the attrib to the right number.

We test long time today.  I give more emphasis on my approval earlier.  This is nice, balanced attr system now.  Plenty emu/oa and plenty pp/oa.  We only need new client to have a very fun change to game.  I made all arounder build and were able to train fine.  PK were not as good (but doable), but this is to be expected for someone who can make all items themselves.

I personally would like to see what difference 2PP/oa gives than the current 1.75.

And yes, the 'Stat' window will change as part of the client upgrade as Learner has said before.

PK is still far too out of my reach with the allrounder build.

ALSO: Attribute potions will need to be reworked/removed from NPCs!

Attribute potions though would not cause delays though, those can be done later.

Attribute potions though would not cause delays though, those can be done later.

Was just a note, if over looked...

I just tried 6 or 7 different fighting builds on the test server. I like it the way it is a lot. I would have to say though that might, toughness, reaction and dex are not 100% perfectly balanced In comparison to each other. There does seem to be 2 of those skills that seem much better than the rest for my current stats and gear. Not sure if that would change any with different gear or higher lower levels.

I also Played with 2 high rationality mixer style builds which I thought were well balanced as a whole.

If the current is 1.75 pp as pandemic says above I think 2pp would be a bit overkill. With the current amount I can already fight monsters a lot better than i can with the old system.

The balance between Skills, X-Attrs, and EQ is tunable, currently we are running the original balance from OL/EL.

There has been a question raised whether mobs need tuning or not. The example I got was high level were easier then expect to a specific player. So additional input would be good. When in doubt, if this were to go live, it would be better to be too tough to begin with while more tuning happens then too easy.

I think mobs need tuning, but also work on implementing/adjusting the exp gain from them. Also, we need new mobs in game as well, for more variety, but we should really talk about that in conjunction with what the max-level cap will be. I know people don't like the current 95 one(yes, its 95, nobody will train up more than that, that's 400m exp, you can say 'look at EL' all you like, nobody is that brain damaged to train that much for no benefit).
So, I think mobs need readjusting, as well as the exp gain from them - its way too high atm, and as you level it doesn't go down fast enough - I could still get decent exp from trolls, even if I'm 30 levels above them - not good. The level cap should be controllable via mobs as well (if there aren't any mobs that give you good exp after a level, people wont be able to get more levels).

For tuning the mobs exp etc, I suggest another thread since this one is related to X-Attr's.

okokok so L told me to think outside the box, so I did, so here is my not-so original idea.
How about we get rid of EMU entirely, and make the game based on SLOTS ?
Like, you start off with 12 slots (currently we have 36) and via quests/equipping items/leveling you get up to 30 slots.
Items wouldn't weight anything anymore, but they wouldn't stack like they do now. We'd have item-stacks, for example sulfur would stack in amounts of 20, when your reached 20 sulfur that would be 1 stack, and it would start another one - in a different slot.
With 30 slots and end-game, people would be able to carry around 500~ sulf pe load(600 would be max, but im guessing you need space for some other items as well) - ofc this can be tuned, making a stack of sulfur hold up just 15 sulf, making max amount carried at about 390 or so.
Same concept could be applied to all items, so we could control the 'maximum you can carry' but how items would stack, and the amount of slots you'd have. Flowers could stack in larger quantities, whereas heavier ores in smaller quantities. Same with potions etc.
For comfort purposes, the items should still appear in storage as a whole, and count as just 1 stack, so trading at storage is easier.
How would one tune the amount they can carry? They can go and complete quests for extra slots, leveling up, achievements etc. But the maximum you can get should be well defined.

For the ones who still don't understand what I'm saying, here's a pic : 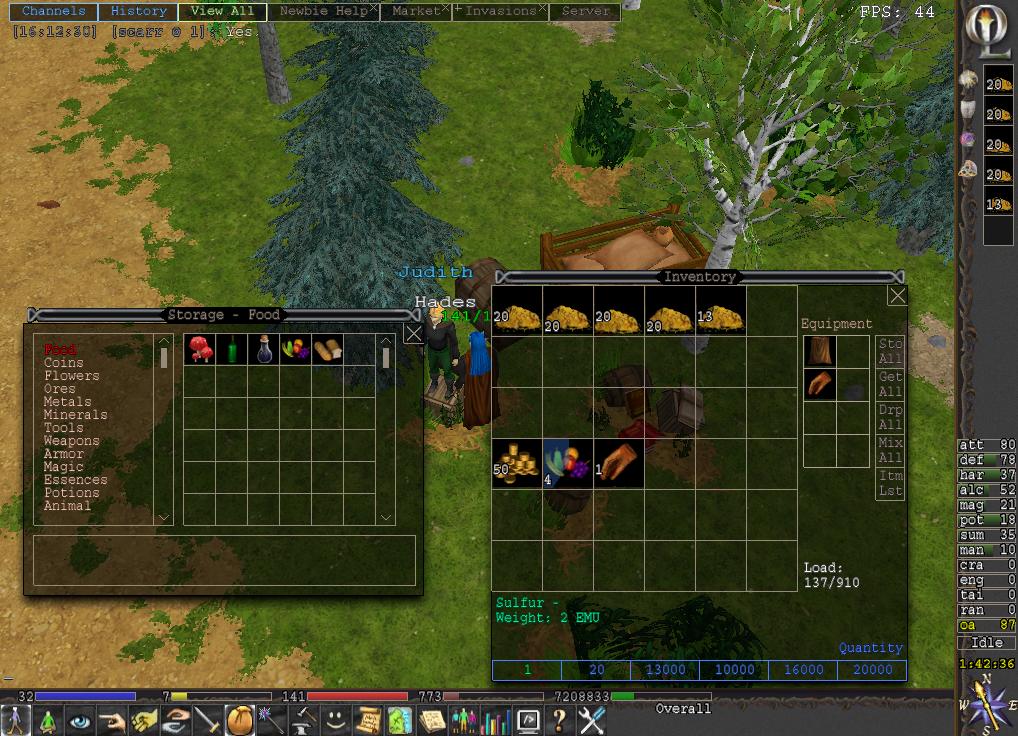 Yeah, this sounds good... "Bags" like Learner was saying give extra slots too etc?

interesting. I think if the slot idea were to happen then some tuning of recipes would be needed as well.  If we can no longer carry such huge loads of ings then there isn't really anymore need for it to take mass amounts of ings to make items.  This could possibly lead to less making industrial sized batches of things, which in turn could lead to items giving more xp when made, leading to less oversupply of things in game.

Yup, what I'm trying to lead this game to. I don't consider fun spamming the same item 100k  times in order to achieve levels. I'd rather just make 50-100 of that item and then move to the other one, not flood the market with useless stuff. And when I get to a decent level, start looking/hunting for new recipes/ores/etc. so I can make really nifty stuff

yep that's why i thought depletable harvables would be good.  maybe both ideas combined is the way to go

This could possibly lead to less making industrial sized batches of things, which in turn could lead to items giving more xp when made, leading to less oversupply of things in game.

I'm not so sure its the making of industrial sized batches that causes the problem, but when ppl then try to dump them on the market. A solution here might be to remove all exp on items mixed outside of a school, but to increase exp on items mixed inside. That then removes the incentive to oversupply, and the consequent damaging effect on the economy.

As a result, the price of items rises to reflect the real value of time, knowledge and resources used to make it, in a way that would seem likely to be particularly helpful to newer players.

I don't consider fun spamming the same item 100k  times in order to achieve levels. I'd rather just make 50-100 of that item and then move to the other one, not flood the market with useless stuff. And when I get to a decent level, start looking/hunting for new recipes/ores/etc. so I can make really nifty stuff

I think manufacturing is a particular problem area for spamgrinding, largely because of the need for efe's on advanced items forces players to make lots of intermediate items. Yup, you can sell some of it to trik but, only up to a certain point. Once you get to steel chain, shields and axes, you're pretty much stuffed unless you want to poof them in a school.

It might help if there were a larger range of manu items that didn't require special stones, and were not weapons or armour. However, I guess that raises the essential question of what should then drive the economy (other than combat) ???

Typical things that come to mind  are

I like EMU how it is for the most part. I wouldn't want slots.

Ill agree that mixing is boring and could use change.

I like EMU how it is for the most part. I wouldn't want slots.

Ill agree that mixing is boring and could use change.

I guess you could say time consuming instead of boring.. infact I rather prefer to mix sometimes as I mostly play semi-afk anyway.

I'd like to see mixing changed but It shouldnt be made too easy... but being at the level where I need to start mixing 1K Diss rings for a crafting level (or 4K-5K Vials) is getting a bit much (and i'm only at level 60).

Topic closed and a new Poll opened with discussions there

Back to Game Change Polls


0 user(s) are reading this topic